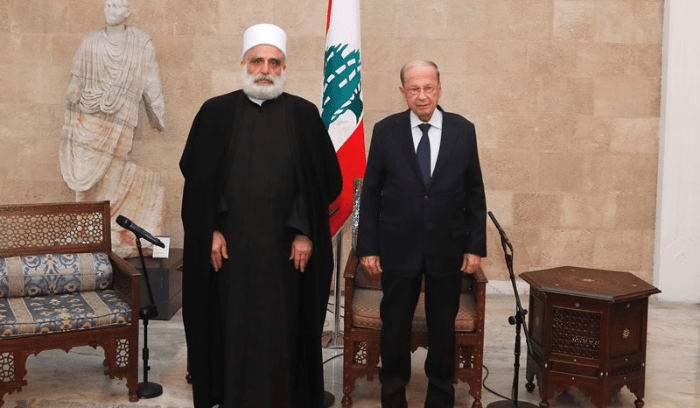 President of the Republic, General Michel Aoun, asserted the importance of the dialogue meeting he called for, and stressed the need for this dialogue to transcend simple political differences. The President pointed out that the political dispute should not lead us to a national dispute over fundamental and basic principles such as identity and existence, which may threaten Lebanon’s unity, its sovereignty and independence.

In addition, President Aoun hoped to support these meetings, “Because dialogue concerns all of us, and its goal is not to achieve a partisan or personal interest. The homeland is for all, and development and prosperity are for all as well, and we must cooperate to preserve this common life in the shadow of peace and security”.

At the beginning of the meeting, Sheikh Dr. Abi Al-Muna gave a speech in which he said: “I am honored to meet your Excellency today in the Presidential Palace, on a visit of thanks and appreciation for your congratulations to us on the position of the Sheikh of Aql and the presidency of the confessional council of the Druze community.

Dialogue is our logic and our approach, and this is what you always call for. You are calling for dialogue today, it is a national dialogue that will lead to the regularity of the government’s work, this is what is required.

You realize today that the main demand is the convening of the Council of Ministers, to approach people’s issues and address their problems. This is what we hope for, because the difficult living situation today is no longer bearable, and Lebanon It is affected by international, regional and local tensions, which impede the reform process in it. Your role is essential in saving the country, and we are with you, by your side, and by all the loyal, in order to stand by our people and society”.

Abi lmona added: “From our position in the Sheikhdom of Aql, we stress the necessity of regular work in this country to solve people’s problems, and to negotiate with the International Monetary Fund, to approach public sector issues, living and educational issues, which are many, and the burden is great, but you are keen as we always strive to address the situation and save the country, of course, there are big and important matters that need a dialogue table, and a discussion of Lebanon’s fate and reality, the defense strategy and how we can save this country.

The issues are great, but the people’s issues today are the most important, as you realize, and we also stress on a second point the importance of coexistence because we come from the mountain, which is the heart of Lebanon, and the model of coexistence where no authority contradicts this coexistence, which is the basis and our permanent demand, through the reconciliation that took place in the mountain, and through our work and our constant call for dialogue.

Parliamentary and fateful entitlements that need to fortify this coexistence, for we do not want and do not want, of course, that political differences and quarrels be a factor that negatively affects this coexistence. As spiritual presidencies, we assume our moral, spiritual, social and national responsibilities. This is our call and our discourse, in order to contribute, through these spiritual and moral responsibilities, to creating a favorable atmosphere and a positive climate in this country.

In addition, Abi Lmona stressed that “Lebanon is a message and is greater than a homeland, and this message stems from coexistence among its various components, to emphasize the message of Christian love, the Islamic message of mercy, and the message of monotheistic human brotherhood. We have moved away from Lebanon, and we are with you, Mr. President, in one boat and with one mission, and one goal is to salvage this message and emphasize its importance”.

For his part, President Aoun responded welcoming the delegation and said: “With regard to our invitation to dialogue, positive reactions came first, but some reservations began to appear. The program of this dialogue meeting is based on 3 main points of contention in Lebanon, and we seek not to resolve them before the elections, however we aim at least to reduce the intensity of talking about it. We do not want to continue a verbal struggle from time to time. The first point is the issue of economic recovery and the distribution of losses. We all want economic recovery, but the distribution of losses we want is fair. Banks today deduct about 80% of the withdrawn funds when withdrawing the dollar. If this situation continues, small depositors will lose all their deposits”.

“The second point is the extended administrative and financial decentralization. Administrative decentralization does not abolish the link with the central state, but it allows for the achievement of development and prosperity in the various regions” the President added.

“As for the third point, which is the defense strategy plan that must be studied, because Lebanon is a country that is almost able to defend itself within its surroundings in order to preserve its independence and sovereignty. We must deal with discipline with the problems and disputes in our surroundings, and not go to more than that” President Aoun said.

“We hope to support these meetings, which should transcend political differences, because dialogue concerns us all. Its goal is not to achieve a partisan or personal interest. Political disagreement should not lead us to a national dispute, i.e. a dispute over identity and existence. Sometimes it is about a specific law or project and not on fundamental and basic principles in the life of the nation, which may threaten its unity, sovereignty and independence” the President added.

Moreover, President Aoun emphasized the importance of national integration in the Jabalregion, and the Christian-Druze dichotomy that established Lebanon’s independence and its extension throughout history, stressing that it was and still is with the cohesive unity that forms the roots despite the presence of political differences.

The President stated that the unity of the mountain is not numerical, but rather it is the essence of common life and participation in all matters that we must preserve. “The homeland is for all, and development is the same as prosperity for all, and we must cooperate to preserve this common life in the shadow of reassurance and safety” President Aoun concluded.

Minister Sleem briefed the President on the results of his official visit to Baghdad and the talks he had with Iraqi officials, who “Expressed every readiness to cooperate and help Lebanon at various levels, especially military issues”.

Minister Sleem also said that he discussed with President Aoun the difficulties facing the army during the performance of their duties as a result of the difficult economic and financial conditions facing the country.

The National Defense Minister pointed out that the conversation with President Aoun also dealt with the situation of the institutions affiliated with the Ministry of Defense. — Presidency Press Office

IMF Deal Breakthrough Is Within Reach for Crisis-Hit Lebanon

How the economic crisis in Lebanon is threatening its cedar forests

Jordan to begin exporting electricity to Lebanon in March…

This website uses cookies to improve your experience. We'll assume you're ok with this, but you can opt-out if you wish. Accept Read More